Rim Fire Up To 60% Containment 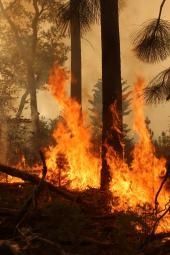 The number of firefighters on scene has dropped to 4,616. 11 homes have been destroyed thus far, three commercial buildings, and 97 outbuildings. The cost to battle the blaze has now surpassed $66 million.

An evacuation advisory remains in effect for Ponderosa Hills and areas east, along the south side of Highway 108, up to Pinecrest. Highway 120 at the Yosemite National Park boundary west to Buck Meadows has been evacuated.

The latest update from the Incident Command Team reads as follows:

Line construction, combined with burning operations, continued overnight where safe conditions and accessibility permitted, on the east and southeast of the fire. The spot fires occurring near Pilot Peak are near containment on the southern perimeter. Fire activity continues to be active in the south and southeast with moderate rates of spread and torching. Today winds will be coming from the south-southwest with up to 20mph gusts. Fire has been slow and moderate in the north end of the fire. Today’s fire weather is extreme. Very active fire and extensive spotting continues to hamper suppression efforts and pose risks to firefighters. Air resources continue to be utilized in assistance with spot fires, slowing fire advancement, and control lines in advance of the fire spread.