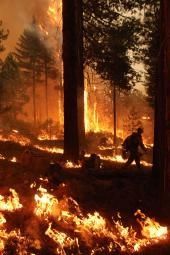 This afternoon firefighters contained a 61 acre fire that spotted up southeast of Pilot Peak Lookout. In addition, there was a planned burn around the Crane Flat Lookout.

The following information was provided by the Incident Command:

The evacuation advisory continues for areas along the south side of Highway 108 from Ponderosa Hills north to Pinecrest. Going towards Yosemite, some mandatory evacuation notices continue south of Highway 120, north of Old Yosemite Road.

There is a complete closure of Tioga Road, west of the Yosemite Creek Picnic Area. A Stanislaus National Forest closure order is in effect for locations near and in advance of the fire.

Significant progress was made today on burnout operations between Hells Mountain and Clavey Meadows.