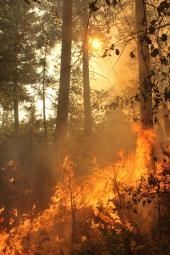 Crews battled winds last night and spot fires, but made progress on putting in fire lines. Here is the latest information direct from the Incident Command this morning:

Crews completed putting fire line around the spot fire southeast of Pilot Peak, however localized winds last night created new spot fires that will be addressed today. In the northwest, east, and southwest areas, crew continue to create direct and indirect lines where accessibility and safety allow. Burning operations were in the Hull Creek Drainage. Burning operations are continuing in areas with favorable conditions around Hetch Hetchy and Harden Lake as well as Big Oak Road near Crane Flat. Contingency lines are being reinforced between the fire and the communities of Tuolumne City, Twin Harte, and Long Barn. Mop up is occurring along the southwest corner of the fire from Pine Mountain to Buck Meadows. Today, firefighters will continue with burning operations and strengthening existing lines, as well as structure defense.

Starting today, the Stanislaus National Forest is closing off public access to Gianelli and Pine Valley trail heads; and the Gooseberry Road (4N35). Forest Officials say Dodge Ridge Ski Area is within the closure area, but will remain open for public access via Pinecrest Lake Road. All recreation activities will remain open in the Pinecrest area. Tuolumne County Sherriff’s Officials yesterday closed off Crabtree Road at Highway 108 due to heavy activity from the Rim Fire. Only residents and fire personnel are allowed in the area.  Highway 120 remains closed from Buck Meadowsto 1 ½ miles east of White Wolf. Highway 120 east/Tioga Road remains open from 1 ½ miles east of White Wolf to the Tioga Pass entrance. Cherry Lake Road is closed at Highway 120. Evergreen Road and Old Yosemite Road are also closed. Highway 120 from Ferretti Road to Buck Meadows remains open for local residents and businesses only.

The Mariposa County Sherriff has lifted the Mandatory Evacuation along Old Yosemite Road to include areas North and South of Bull Creek Road to Little Grizzly Mountain. An evacuation advisory remains in effect for Ponderosa Hills and areas east, along the south side of Highway 108 up to Pinecrest. Ponderosa Hills is off limits to the public with only resident and fire personnel being allowed into that area. An Evacuation Warning has been issued for all residences of Bondurant Mine Road, Texas Hill Road, and Wampum Hill. Highway 120 at the Yosemite National Park boundary west to Buck Meadows has been evacuated. Evacuation centers are at the Mother Lode Fairgrounds in Sonora and at the Greeley Hill Community Center.

The Stanislaus National Forest has expanded the area closure for the Mi-Wok Ranger District on the northern end and the entire Groveland Ranger District.