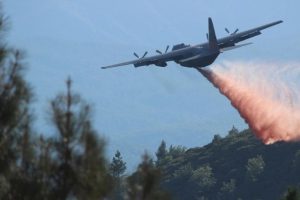 The cost to battle the blaze has surpassed $60 million. The fire is now the 4th largest in California’s recorded history. As of this evening, 5,069 firefighters are on scene.

It was another busy day for firefighters. Here’s the latest information provided this evening by the Incident Command:

Good progress was made on containing a spot fire in the southern region of the fire. Moderate fire behavior was observed where fire was burning from ridge tops downslope. Burning operations commenced between Hells Mountain and Clavey Meadow. Burning operations continued along Tioga Road near Crane Flat and in the Hetch Hetchy area. Completion of burnout operations were done in between Big Oak Station and Hazel Green Ranch. The fire movement is advancing to the east further into Yosemite National Park’s Aspen Valley and Cottonwood Meadow. Natural Barriers are limiting the spread to the northeast near Lake Eleanor.

The Mariposa County Sherriff lifted the Mandatory Evacuation along Old Yosemite Road to include areas North and South of Bull Creek Road to Little Grizzly Mountain. An evacuation advisory remains in effect for Ponderosa Hills and areas east, along the south side of Highway 108 up to Pinecrest. An Evacuation Warning has been issued for all residences of Bondurant Mine Road, Texas Hill Road, and Wampum Hill. Highway 120 at the Yosemite National Park boundary west to Buck Meadows has been evacuated. Evacuation centers are at the Mother Lode Fairgrounds in Sonora and at the Greeley Hill Community Center.