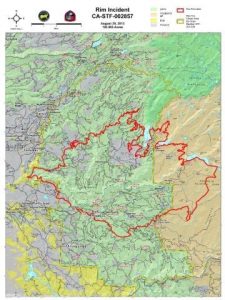 The following information was released by Incident Command:

Very active fire behavior beginning earlier in the day as fire remained fairly active from the previous night. Fire Officials say they are battling running surface fire, torching, crown fire runs, and spotting. Firefighters began burning operations south of Hetch Hetchy and along Old Yosemite Road. Crews continue with line construction near Clavey Meadows near the 3N01 Road. Crews began removing fuels along the Tioga Road and Highway 120 near the Yosemite National Park entrance in preparation for the planned burnout. This work is to reduce the intensity of the burnout.

Advisory evacuations have been lifted for Soulsbyville and Willow Springs. Tuolumne City was opened to residents at Noon today. Ponderosa Hills is still under an advisory and it is off limits to the public with only resident and fire personnel being allowed into that area. An Evacuation Warning has been issued for all residences north of Bull Creek Road (Forest Road 2S02), Bondurant Mine Road, Texas Hill Road, and Wampum Hill. A Mandatory Evacuation has been issued for residences north of Old Yosemite Road (Forest Road 2S01). Highway 120 at the Yosemite National Park boundary west to Buck Meadows has been evacuated. Evacuation centers are at the Mother Lode Fairgrounds in Sonora and at the Greeley Hill Community Center.