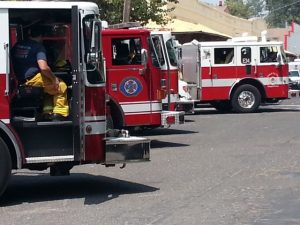 Tuolumne County, CA — The Rim Fire has grown 5,000 acres to 184,481 and still 20% contained. That makes it the 6th largest fire in California on record to date. 4,081 firefighters are battling the blaze. The cost to combat the flames has soared to $33 million dollars. There have been 111 structures destroyed and 4,500 still threatened. Fire Officials say the recent increase in structures destroyed is due to structures lost at the Tuolumne Berkeley Family Camp, which includes 3 commercial properties and 85 tent cabins and outbuildings.

Fire Officials say crews made progress on spot fires in the Reynolds Creek drainage and burning operations south of Duckwall Mountain to Skidmore. They say crews also were preparing for additional burning operations on the north side of the Tuolumne River. Firefighters secured the line from Pilot Ridge west towards the Yosemite boundary along Old Yosemite Highway. Aircraft were used to support operations throughout the day.

For Tuesday night, firefighters will continue with contingency line construction in advance of the communities in the Highway 108 corridor, as well as providing structure protection and preparing for burning operations.

Evacuation advisories remain in effect tonight for Ponderosa Hills and Tuolumne, and the southside of the Highway 108 corridor from Soulsbyville to Pinecrest. 16 homes are still under a mandatory advisory notice in the Clements Road area in South Tuolumne County. A Mandatory Evacuation has been issued for residences north of Old Yosemite Road (Forest Road 2S01). Highway 120 at the Yosemite National Park boundary west to Buck Meadows has been evacuated.  An Evacuation Warning has been issued for all residences north of Bull Creek Road (Forest Road 2S02), Bondurant Mine Road, Texas Hill Road, and Wampum Hill.