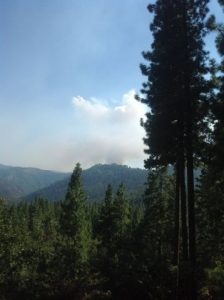 CAL Fire Spokesperson Daniel Berlant announces that 149,780 acres have now burned, and 4,500 residences remain threatened. Winds will remain a concern today, with gusts up to 26 miles an hour out of the south, according to Berlant.

In Tuolumne County, an evacuation advisory still remains in Tuolumne City and the area east of Highway 108 from Mi-Wuk Village to Soulsbyville.

In Tuolumne County, school has been cancelled, countywide, at least through Tuesday. The same goes for Columbia College’s main campus.

A community meeting will also be taking place at 4pm today at the Word of Life Fellowship in Mi Wuk Village.

The lastest map of the August 26th Rim Fire is here.