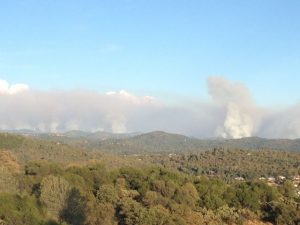 Yosemite, CA — Due to the Rim Fire, officials in Yosemite cleared brush away and set sprinklers around two famous groves of giant sequoias.

Park officials are concerned about the Tuolumne and Merced Groves as the raging wildfire stretches into sections of the park. “All of the plants and trees in Yosemite are important, but the giant sequoias are incredibly important both for what they are and as symbols of the National Park System,” park spokesman Scott Gediman told the Associated Press.

The trees are among the oldest living things in the world, and can resist fire. However, Park officials are concerned due to the overly dry conditions this year.

Firefighters are bracing for the possibility of strong winds today. The Rim Fire is estimated to be 129K acres and is 7 percent contained. For a story with the latest information on the suppression efforts near Tuolumne City and Pine Mountain Lake, plus the latest on evacuation advisories, click here. Officials have been holding their morning briefing to lay out the plan of attack for the day.