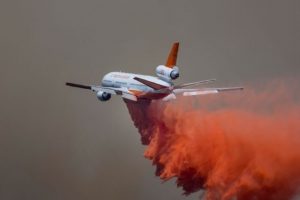 Groveland, CA – The Rim Fire has grown to 129,620 acres and is 7% contained. 2,637 firefighters are on the scene battling the blaze. The cost to fight the flames has risen to $12.4 Million. 23 structures have been destroyed and 4,500 are still threatened.


Fire Officials say crews continue to work toward increasing containment of the Rim Fire. On the western side of the fire, crews successfully conducted firing operations to bring the fire line down to the Tuolumne River in efforts to keep the fire from spreading to the west toward Highway 108 corridor.

A major effort is underway to hold the fire east of the North Fork of the Tuolumne River. They say crews have strengthened fire lines that are holding above the community of Pine Mountain Lake. Additional efforts are focused on the eastern edge of the fire in Yosemite National Park to minimize impacts to the park.

Forest Officials say direct attacks are being used in some areas of the fire and more will be utilized as firefighters gain safe access. In other areas where there is extremely steep with rugged and inaccessible terrain, they say fire crews are using a tactic called indirect attack. That creates control lines away from the fires active edge. Air resources, including several helicopters and air tankers, are being utilized to slow the forward progress of the fire.

Most mandatory and advisory evacuation have been lifted for the Pine Mountain Lake subdivision, but a handful of residents still cannot return to their homes. Tuolumne County Sheriff’s Spokesperson Scott Johnson say the order has been lifted on units 11, 11A and 12, but 18 homes on Clements Road and Graham Ranch Road area in the Pine Mountain Lake area are still under the mandatory evacuation order until the fire danger is mitigated.

Evacuated residents from Highway 120 east to Buck Meadows are also being allowed to return to their homes. Advisory evacuation notices are still in effect for Tuolumne City, Ponderosa Hills, and the southside of Highway 108 from Sugar Pine down to Soulsbyville.