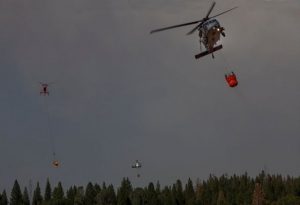 Pine Mountain Lake, CA — Most mandatory and advisory evacuation have been lifted for the Pine Mountain Lake subdivision, but a handful of residents still cannot return to their homes. Tuolumne County Sheriff’s Spokesperson Scott Johnson say the order has been lifted on units 11, 11A and 12, but one area is still affected.

“We do have approximately 18 homes on Clements Road and Graham Ranch Road area in the Pine Mountain Lake area. Those homes will continue to be under the mandatory evacuation order until the fire is mitigated enough where we can allow those people in and we don’t really have an estimate yet,” says Johnson.

Evacuated residents from Highway 120 east to Buck Meadows are also being allowed to return to their homes. Advisory evacuation notices are in effect for Tuolumne City, Ponderosa Hills, and the southside of Highway 108 from Sugar Pine down to Soulsbyville.

Pete Fenstermaker lives above Ponderosa Hills off of North Tuolumne Road and is still under an advisory evacuation. He says he didn’t see much smoke this afternoon, but it usually comes back at night and in the morning and it’s hard to breath. Sheriff’s deputies came to his door last night informing him of the advisory evacuation.

“Your mind wanders and you think the worse, but it wasn’t as bad as I thought so the stress level dropped. I feel safe, I’ve watched the firefighters and they are really doing their job so kudos to them,” says Fenstermaker.

All access to North Tuolumne Road at Highway 108 and Tuolumne City is restricted except to residents and emergency personnel only. Highway 120 is still closed between Groveland and Yosemite.