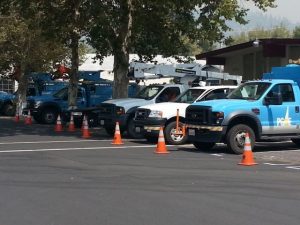 The incident command team has been getting its morning briefing.

An evacuation advisory remains in effect for Tuolumne City, and the area east of Highway 108 from Mi Wuk Village down to Soulsbyville. The advisory also includes Willow Springs. In South Tuolumne County, an evacuation order is in effect for Pine Mountain Lake Subdivision units 11, 11A and 12. The remainder of the subdivision remains under an advisory notice.

Highway 120 is still closed to motorists wishing to travel between Groveland and Yosemite.
An evacuation center remains open at the Mother Lode Fairgrounds. The Red Cross and County OES are prepping for the possibility of opening another evacuation center, but where the additional site would be has not been announced.

Community meetings are scheduled for today at 2pm at the Sierra Bible Church in Sonora and at 4pm at the Word of Life Fellowship in Mi Wuk Village. Officials will be on hand to provide residents an update on the suppression efforts.

At least 17 square miles has burned inside Yosemite National Park in a remote area of backcountry. Yosemite is warning hikers to stay out of that region, and has stopped issuing some backcountry permits.

The cost to fight the blaze has topped $7.8 million. 4,500 structures are considered threatened, and 23 (11 homes -12 outbuildings) have been destroyed. There are now 2,672 firefighters assigned to the incident. The fire slowed overnight, as it typically does, and the big concern will be during the heat of the day.

To view the latest on a second State of Emergency Declaration issued by Governor Jerry Brown, click here.