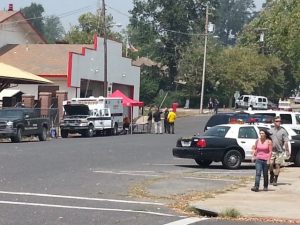 Spokesperson Scott Johnson says, “Residents will be getting a 911 reverse call letting them know that they’re under an advisory evacuation. Again this is an advisement not a mandatory order.”

About a half hour ago, the advisory was issued to Sherwood Forest to the east entrance of Twain Harte down Highway 108 to Willow Springs and Soulsbyville. Highway 108 is open to traffic.

Black Oak Casino can not be accessed by anyone who does not live in Tuolumne City. They have canceled events, as listed here.

That is not the case in Tuolumne City where all access to the city is denied to anyone who is not a resident or a member of the Rim Fire emergency crews. The California Highway Patrol is manning road closures at all entrances into Tuolumne City and you must have proof you are a resident to enter.