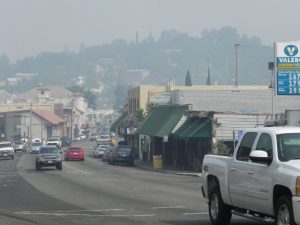 Sonora, CA — The only mandatory evacuations issued by the Sheriff’s Office are for Units 11, 11A and 12 in the Pine Mountain Lake Subdivision.

The following are advisory evacuation areas:

Johnson they have not started using the reverse 911 system in Tuolumne City or Ponderosa Hills yet because the advisory evacuation notice is precaution at this time. However, they are recommending residents get prepare in the event a mandatory evacuation is ordered. Some streets in downtown Tuolumne City are shutdown due to  law enforcement activity in the area.

The only shelter open is at the Mother Lode Fairgrounds in Sonora. Red Cross officials tells us they have seen a stream of people coming in since the Pine Mountain Lake evacuations started. At about 8pm on Thursday, they had 90 people registered and anticipate more to come through the doors. They say many people came with their pets in hand.

If you need help to move your animals, Tuolumne County Animal Control is kenneling pets. They can coordinate places for livestock to go. You can call them at 209-694-2730. Also, the Sheriff’s Posse Fairgrounds are taking in horses. You will need to bring your own water bucket and feed. Temporary pens can be hooked up to the arena as well. You can call 209-532-8269 or 209-559-1323.