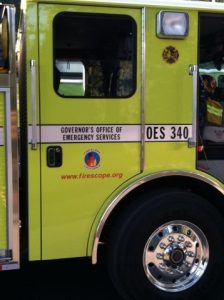 Sonora, CA — Now that the Governor has deemed the Rim Fire a State of Emergency the Feds may follow suit.
That is the hope from Tuolumne County Officials.


In a response to the Governor’s proclamation, County Administrator Craig Pedro states it may also serve as a precursor to a request for a Presidential Declaration of a Major Disaster.

Below is the Pedro’s response:

At 3:00 p.m. today, Governor Jerry Brown proclaimed that a State of Emergency exists within Tuolumne County due to the RIM Fire (see attachment). This proclamation was made in response to a resolution approved by the Tuolumne County Board of Supervisors during an emergency meeting held on August 21, 2013.

The Board of Supervisors appreciates the Governor’s quick action as the proclamation will open doors to additional State resources to combat the fire and financial assistance with local costs to combat and recover from the RIM Fire which continues to rage within the County of Tuolumne. The Governor’s proclamation may also serve as a precursor to a request for a Presidential Declaration of a Major Disaster which could provide additional support for all agencies involved in response and recovery activities and assistance to impacted citizens and businesses.

At this hour Sheriff’s Deputies are going door to door telling residents of Pine Mountain Lake, as well as North Boitano Road and North Ferretti Road to Elderberry Road that it is time to go. Evacuees are being urged to go to the Mother Lode Fairgrounds in Sonora which is the only shelter open at this time.

If you need help to move your animals, Tuolumne County Animal Control is kenneling pets. They can coordinate places for livestock to go. You can call them at 209-694-2730. Also, the Sherriff’s Posse Fairgrounds are taking in horses. You will need to bring your own water bucket and feed. Temporary pens can be hooked up to the arena as well. You can call 209-532-8269 or 209-559-1323.
Also, if you have medical equipment or issues and need help you can call the operation center at 209-533-5183 or 533-5174 and they will assist you in getting out.