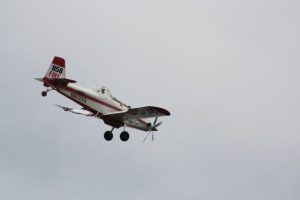 Groveland, CA — The Pine Mountain Lake Airport has been closed to the public so that air resources can reduce the amount of time it takes to refuel.

Tuolumne County Officials report that it potentially saves 15 minutes to allow fire resources to fly-into Pine Mountain Lake as opposed to Columbia. Also of note, later today a DC-10 will be arriving to help with the efforts. The cost to fight the Rim Fire has now topped $1.7 million.

The total acreage remains at around 16,200 and there is 5% containment.

Michelle Puckett at the Rim Fire Incident Command Post reports that the fire is burning heavily in the Tuolumne River Canyon, from near Lumsden Bridge over to the Gravel Range and Jones Point Lookout. The fire has crossed the confluence of the Tuolumne and Clavey Rivers and is burning to the north towards Walton Cabin Spring.

Ferretti Road is closed this morning, as is Highway 120 from Smith Station To Cherry Lake Road. Officials now report that nine structures have been destroyed in the Packard Canyon area, including two homes and seven outbuildings.

A special thanks to our community news partners for sending in photos of the fire. They can be sent to news@clarkebroadcasting.com.