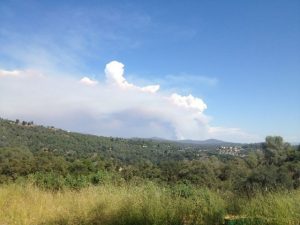 Groveland, CA — The Rim Fire has caused two more areas to be evacuated. The first is the Berkeley Family Camp which is east of the fire.

Tuolumne County Sheriff’s Spokesperson Scott Johnson says, “This evening we went to the camp to advise those still there they should leave for their own safety. They had already decided to evacuate several children out of there and they left on a bus. Approximately, 35 families had their own transportation and went ahead and left.”

The Mother Lode Fair Grounds in Sonora have been turned into and evacuation center for people displaced by the Rim Fire. It is open until further notice. Tuolumne County Transit buses are staged at Mary Laveroni Park in Groveland, in the event that South County residents impacted need transportation to the evacuation center. Tuolumne County Transit will run fixed routes tomorrow and have limited one dollar rides.

Because of the smoke, road closures and evacuations….The Big Oak Flat-Groveland Unified School District has cancelled classes for Wednesday.

The latest update from the Forest Service is that the Rim Fire is around 11,000 acres. They say they are making progress laying some hand lines in to protect the communities of Groveland and Pine Mountain Lake.

A special thanks to our community news partners Steffanie Reed, Nathan Grinsell David Wheat, and Darrick Shaw for sending in photos of the Rim Fire.