Shelter From The Fire 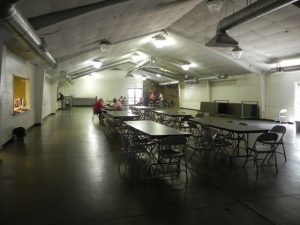 Sonora, CA — The Mother Lode Fairgrounds have been turned into and evacuation center for people displaced by the Rim Fire.


By around mid-afternoon, about a half dozen people were staying at the shelter and more are expected throughout the evening. Most of the early arrivers were from the Yosemite Westgate Lodge off Highway 120 in Buck Meadows that was evacuated yesterday at 3pm.


Mindi Young, a worker at the lodge says, “We were working and the smoke got worse and it was black outside. All of a sudden fire trucks and police cars came in racing in to the lodge. They told us we had to leave right away because the fire was coming fast.”

The shelter is in the Manzanita Building. There are cots set up and food for those who need it.
Red Cross Spokesperson Debbie Calcote says if the public wants to help out they need things like 50 gallon trash bags, fruit, caution tape and duct tape.

And it is not only people that can come to the shelter. Calcote says pets are welcome and Tuolumne County Animal Services will help kennel them. She says you do not have to be an evacuee to use the shelter. Those who need to get out of the smoke for health reasons can also come to the fairgrounds.

Tuolumne County Sheriff’s Office has been giving advisory evacuation notices to residents along Clements and Ferretti Road today. Also, the Yosemite Vista Estate subdivision was evacuated due to a power outage.

Officials have put in place a reverse 911 system to notify residents that are under an evacuation advisory. Tuolumne County Transit buses are staged at Mary Laveroni Park in Groveland, in the event that South County residents impacted need transportation to the evacuation center. Tuolumne County Tranist will run fixed routes tomorrow and have limited one dollar rides.

The evacuation center at the fairgrounds is open until further notice.