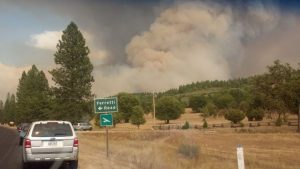 Groveland, CA — Officials with the Tuolumne County Sheriff’s Office have started evacuating homes in the area of Clements Road.

Spokesperson Scott Johnson points out that nearby Pine Mountain Lake is not under any type of evacuation advisory. There are still evacuation notices for Buck Meadows, San Jose Family Camp, Rainbow Pool, Yosemite Inn, Early Intake, Evergreen Lodge, Packard Canyon and the Spinning Wheel Forest Service Facility. Officials have put in place a reverse 911 system to notify residents that are under an evacuation advisory.

An evacuation center is up and running in the Manzanita Building at the Mother Lode Fairgrounds. Johnson adds that Tuolumne County Transit buses are staged at Mary Laveroni Park in Groveland, in the event that South County residents impacted do not have transportation to the evacuation center.

The latest update from the Forest Service is that the Rim Fire is around 11,000 acres.