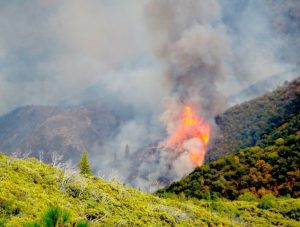 Tuolumne County Supervisors Chairman Randy Hanvelt has called for a local “State of Emergency” due to the Rim Fire, and it was ratified this morning by the full Board.

It helps raise awareness about the fire and opens the door for additional state resources and potential funding. Tracie Riggs with the County Office of Emergency Services reports that the evacuation center at Tioga High School is currently being moved down to the Mother Lode Fairgrounds this morning. Evacuees can go to the Manzanita Building. Riggs notes that there is ample parking available, and space for small animals in cages like dogs, cats and birds. Last night the Tioga High School evacuation site had as many as 12 people at one point.

Jerry Snyder with the Stanislaus National Forest reports that the Rim Fire is now close to 11,000 acres. Two homes have been destroyed, as well as five outbuildings. There are 2,500 structures considered in danger. Snyder says no injuries have been reported as a result of the fire.

A big thanks to our community news partners Lew Richardson, Rick Martinez, Suzanne Ctibor, Mike McEvoy, Jerry Day and Doug Schmiett for sending in photos of the fire. They can be e-mailed to news@clarkebroadcasting.com.

The video shows the effort to battle the fire from the air.