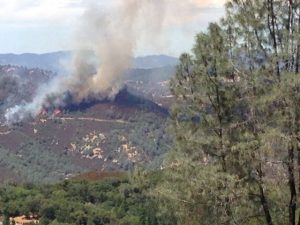 The Rim Fire in the Stanislaus National Forest is now 450 acres, and there is no containment. 252 firefighters are assigned to the incident in the Groveland Ranger District. The cause is still under investigation. The fire is located in the Clavey River Canyon area, about one and a half miles east of the confluence of the Tuolumne River.

According to information provided by Forest Service Spokesperson Jerry Snyder, the strategy is to paint the ridge with retardant before committing ground units to attack the fire. Dozers and aircraft will play important parts in slowing the fire’s progress. With no ground access to the fire yet, the plan for today is to transport crews to strategic locations via helicopter.

Because of the difficult location, and growth potential, last night the Forest Service brought in an outside South Central Sierra Incident Management Team, similar to what was done with the Power Fire near Pinecrest.

The second major fire in the region, known as the Bridges Fire, is still estimated to be 25% contained. It is located near Parrotts Ferry Road and Camp Nine in Calaveras County. CAL Fire says it is estimated to be about 125 acres. No structures are considered in immediate danger, and there are no evacuation orders. Two firefighters have reported injuries.

To read about a Red Flag fire warning issued by the National Weather Service, click here.