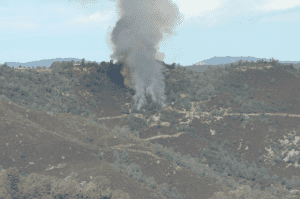 Columbia, CA — Cal Fire reports more crews are heading to the Bridges Fire as it has grown to 25 acres. Firefighters and Columbia air units are hitting the flames that broke out in some grass on Parrotts Ferry Road near Camp 9 Road north of Natural Bridges. The fire started at about 3 acres and has spread to 25. Cal Fire says there is no containment at this time and the flames are moving at a moderate rate of spread.

Cal Fire Spokesperson Lisa Williams says, “Access to the fire has been a problem for crews. There are structures in the area, but none of them are in immediate danger at this time.”

Cal fire says air units have been able to lay a retardant line around the fire. They are still working on getting hoses all the way around the flames. There is still no word on containment.

A special thanks to George Hunter, Tim Warren, A. Horvath, and Patrick Mcbride who sent in photos to news@clarkebroadcasting.com. Also, a big thanks to Carey Haughy who sent in a video of a fire retardant drop. Click here to view.

Update 2:04pm: Cal Fire Spokesperson Lisa Williams says, “We are asking motorists to watch out for fire equipment and crews around the fire scene especially Parrotts Ferry and Camp 9 Roads. Also, there will be fire resources heading through Angels Camp and Vallecito so people just need to be aware and use caution in the area.”