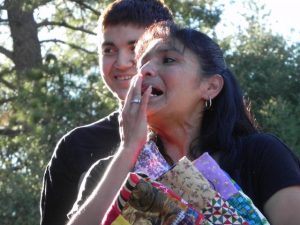 Columbia, CA — Two families have put the welcome mats out at their new Habitat for Humanity homes. They have used their own sweat and hard work, in all 500 hours worth, helping to build their homes. The house is a duplex each with its own one car garage, three bedrooms and two and half baths.

Harvey and her son Nick wiped away tears as the ribbon was cut and they walked into their new home at the grand opening ceremony last night in Columbia. The other family, Annette Castanon and her son Alex, also hugged each other and cried. The homes are three bedrooms and two and half baths.

“I love the paint color, the bathrooms, kitchen, the way it’s laid out, I love everything about it. I wouldn’t change a thing. I love it,” says Harvey.

The families found out they would be the owners back in February. Since then they have been helping with the design inside the home. Habitat for Humanity of Tuolumne County Executive Director, Betsy Harden says it is always an emotional for everyone involved.

With her voice cracking, Harden says, “For Dayna Harvey for instance, this is her 102 move. The struggles that they’ve been through and never getting that one hand up to help them have a safe affordable place for their kids. Now that they’ve got that foundation we just keep watching them springboard into success. It’s great!”

One note, Harden says these are the first affordable housing units in Tuolumne County that will have solar power which makes the home affordable long term.

Click here for video tour of one of the homes.