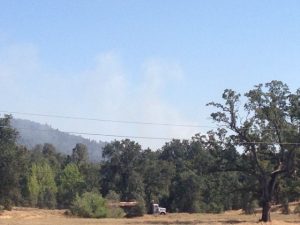 Sonora, CA — Fire Fighters and Columbia Air Units responded to two fires in Tuolumne County. The rate of spread of the fires has been stopped but they are not reported as contained by CAL Fire dispatch.

One fire at the 18000 block of Blue Bell Road just off of Tuolumne Road in Sonora reportedly started when a vehicle hit a power pole. The owner of a business in the area, Solomon Gardens Nursery, George Kirk said that he heard a very loud explosion. Kirk also saw another fire that seemed to start at the same time, about 3:15PM.

CHP reported a vehicle hit a power pole and Kirk said that a woman was being interviewed and did not look to badly hurt. The downed power lines have caused a one acre vegetation fire which is not contained but the forward spread is reportedly stopped. Blue Bell road is closed at this time.

The second fire is on Kelly Ranch Road. A fully engulfed house and one acre vegetation fire are being worked on by fire crews.

Click here for map of the two fire locations.

There PG&E spokesperson Nicole Liebelt reports 130 PG&E customers are without power at the Junction shopping center area over to the Greenley Road area. PG&E Crews are on the scene. Update 5:19PM shoppers and clerks at the shopping center report the power is on.

Update 5:14PM: Both fires are contained, Chris Covert at the CHP office says the Kelly Ranch Road fire was mostly confined to the structure, but there is no word on if it was a residence. He also says the structure fire was not related to the East Blue Bell Road fire at all but they were reported at the same time and are close so it was very confusing for responding agencies and crews. He said that air attack was able to go between both fires to help put it them out.

Update 6:0pm:  Cal Fire reports they have stopped the forward rate of spread on both fires. However, they are stopping short of calling the fires contained and say they will  be mopping up into the night. PG & E reports the outages could last for up to 8 hours.

Thank you to Adam Herd for sending in the photos of the scene.