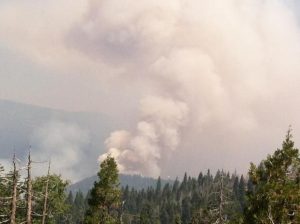 Stanislaus National Forest, CA — Fire fighters have kept the Power Fire in the Stanislaus National Forest at 500 acres and now it is 12 percent contained. The fire is along the eastern edge of Beardsley Reservoir, near Hells Half Acre Road about 4 miles northwest of Pinecrest. Click here for a map of the region. The fire is moving at a moderate rate, burning brush and timber along steep and rocky terrain and has created a lot of smoke.


Forest Spokesperson Jerry Snyder says, “Down at the lower elevations you’re seeing a lot of brush that burns hot and quick. As you move up in elevation there are more trees burning creating more smoke. When the sun goes down and the breeze starts blowing down the canyon that’s when you’re going to see smoke impact the Sonora area.”

Forest Officials report they are continuing to dig dozer lines on ridge tops while handcrews are building lines out of the river canyon. There have been no evacuations. Highway 108 is open. However, Snyder says it could be closed intermittently due to the heavy smoke conditions or crews possible back burning near the roadway.

Snyder says, “We are counting on recent fire prevention work done along Highway 108 to help us battle the blaze and stop the flames from spreading.”

One incident Monday night left a fire engine severely damaged. Forest Officials report a tree that had burned out in the center fell, hitting the engine. Luckily, no one was injured as crews were laying out fire hoses quite a ways away when it came down. Also, they say fire fighters reported hearing trees falling throughout the night. There is still no word on what sparked the blaze. The first flames were spotted at 6am Monday morning.