Highway 108 Closed Due To Fire 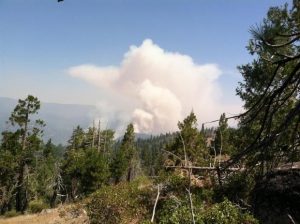 
Forest Service Officials report that Highway 108 is closed from the east side of Old Strawberry Road to Clarks Fork Road. The fire has not jumped the highway, but is running parallel to it. The fire originated along the eastern edge of Beardsley Lake, along Hells Half Acre Road. Click here to view a map. It is not immediately known how long Highway 108 will be closed.

Forest Service officials report that the fire still poses a potential threat to the Donnell Curtis Transmission lines, which firefighters are working to protect. The Tuolumne County Sheriff’s Office reports that there are no mandatory evacuations, but the Cascade Creek and Mill Creek campgrounds are under advisory evacuations. Fire resources are on scene from the Forest Service, Tuolumne County Fire, CAL Fire and other agencies.

The cause of the fire is under investigation. It was first spotted at 6am Monday.

It is not the only fire that officials are on scene of this evening. Firefighters also helped put out a car fire that started at around 6:45pm along Hunts Road, near Longeway Road, in Tuolumne County. It has been causing a traffic hazard along Hunts Road.