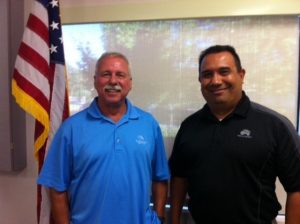 The Beaudoin family moved to Valley Springs in 1986. Since then they have been involved in several local fund raising efforts. Beaudoin is a former Grand Knight for the Knights of Columbus and worked for 35 years in the telecommunications industry retiring in 2012. Beaudoin says, “This has been a great place to live and raise our family for almost 30 years, the Foundation is an excellent resource for the community and I am flattered to become a part of it.”

Gil Valtierra moved to Calaveras County in 2005 to take a position with the school, Rite of Passage, in San Andreas, as head football coach and athletic director. He has 10 years of football coaching experience and works as a banker at Wells Fargo Bank covering branches in Jackson, Plymouth, and San Andreas. Valtierra has also been coaching football at Calaveras High School for the past 5 years as an assistant to the varsity team. This year he will add head JV football coach to his responsibilities.

Valtierra says, “Whether it’s in the bank helping people or on the field helping young men, I love the feeling I get when I make a positive difference in someone’s life. Calaveras Community Foundation has been making a positive difference in people’s lives for over a decade and I’m looking forward to being a part of a great team of people that have the same values.”

The Calaveras Community Foundation (CCF) was founded in 2000 by West Point residents Beth Childs and Genna Hurst. Their goal was to create a legacy of charitable giving and to connect donors with nonprofit organizations that support a healthy, dynamic and prosperous community. As of December 31, 2012, more than $680,000 has been distributed in scholarships, grants and assistance. Other funds have gone to support a wide range of projects to improve the quality of life throughout the county.