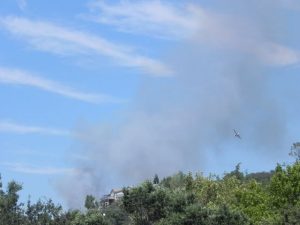 Sonora, CA — That is the warning from Cal Fire after Friday’s 5 acre vegetation fire. Crews battled the flames for five hours before containing the blaze. Flames broke out on the 20,000 block of Lyons Bald Mountain Road off of Greenley Road around 2:30 Friday afternoon. When crews arrived a mobile home was fully engulfed and the flames had spread to about 3 acres of vegetation.


Several homes on Lyons Bald Mountain Road were threatened and residents were forced to evacuate. Also the road was closed down as fire fighters on the ground and in the air tried to stop the flames forward rate of spread.

Cal Fire Battalion Chief Barry Rudolph says, “Due to the very dry conditions, we are experiencing extreme fire behaviors including spotting and torching. This is playing pretty heavily in to how we are approaching the fire responses. We are throwing everything we can at these fires when they’re starting.”

A trailer and a well pump house were destroyed in the fire. However, Rudolph says it could have been worse. He says one big problem was a lack of defensible space.

“There were four or five homes that the fire literally burned right up to the structures themselves. Also, several wood piles caught fire so it’s very important that we remind everyone out there to maintain the defensible space. It is vitally important for fire fighters so we have a safe place to work out there. It was a very close call on this fire,” say Rudolph.

Both the evacuation and Lyons Bald Mountain Road closure were lifted in about a half an hour. Thick smoke and the Columbia Planes could be see flying back and forth over downtown Sonora all yesterday afternoon.  The fire was contained at 8pm last night. Crews are back on the scene today checking for hot spots. The cause of the fire is still under investigation.