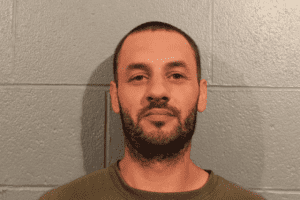 Angels Camp, CA — A high speed chase in Angles Camp ended with a police K9 dog running down the suspect. It happened Thursday around 1:20 am when a police officer spotted a 2003 BMW sedan flying down South Main Street at more than 70 mph. When the officer tried to pull the car over near Demarest Street the driver 29-year-old Kyle Rogers of Scotts Valley took off.


Police report Rogers made a sudden left turn into a nearby parking lot and headed onto Demarest Street. He then ran several red lights on South Main Street. The first one was at the intersection of Murphys Grade Road; another was on Highway 4. Police say once on Highway 4 Rogers reached speeds of more than a 100 mph.

The officer caught up to Rogers on Pool Station Road. Rogers jumped out of the car, climb over a fence, and ran into a nearby field. Police say they used a K9 dog to catch Rogers.