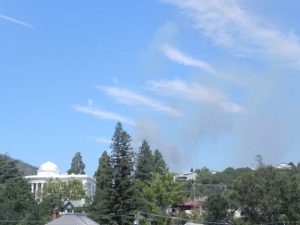 Sonora, CA –Cal Fire reports crews have stopped the forward rate of spread on a vegetation fire on the 20,000 block of Lyons Bald Mountain Road off of Greenely Road. When crews arrived on the scene around 2:45 this afternoon a mobile home was fully engulfed in flames and had spread to about 3 acres of vegetation. The blaze has grown to nearly 5 to 7 acres, but Cal Fire it is holding.

Residents in the immediate area of the fire were evacuated from their homes and Lyons Bald Mountain Road was closed at Greenley Road for about half an hour before both orders were lifted. Then just before five the road was closed again. The CHP reports that was due to fire fighters asked that the road be closed again so they could move some equipment from the fire scene. The roadway was closed for about 10 minutes that time.

Cal Fire says crews will like be on the scene all night. Click here for a map of the area.