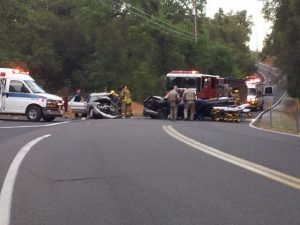 Jamestown, CA — There was a head-on crash in Jamestown last night.

The CHP reports that 41-year-old Annadine Matheny of Jamestown was driving along Jamestown Road at a high rate of speed. She was passing vehicles over the double yellow lines, and was going down the middle of the road when she went into a curve at Golf Links Road. Her 1994 Mazda crashed head-on into a 1997 Buick driven by 66-year-old Robert Roberson of Jamestown. Roberson was pinned into his vehicle and had to be extricated before being life-flighted to Memorial Medical Center in Modesto. The CHP says Matheny was life-flighted to Doctors Medical Center and is being investigated for possible DUI.

The crash happened shortly before 7pm.

A special thank you to Samuel Pearce for emailing us this photo.