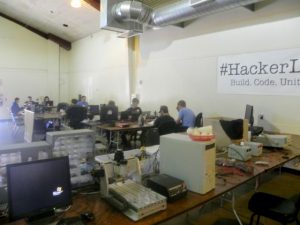 About 60 people attended the event. Lujan says they ranged in age from 5 to 55. They included many locals, plus and a few that traveled from Turlock, Modesto and Manteca.

Attendee Richard Call, a Software Engineer at Front Porch, Inc. said the event attendance compared to a Hackathon he attended in San Jose. He said the turnout was really amazing for the small Sonora area. Lujan says other attendees were very excited about having more local events to give them access to the unique tools and the variety of resources at the event.

Lujan says that they plan to do another event in the Spring and expects the Sonora area will participate in an annual “Great Make Day” with other groups around the country.

On August 9, Tuolumne County Economic Development Authority Director Larry Cope will present a study done by Hacker Lab and Director Lujan stating if there is enough demand locally to warrant support for an Innovation Lab like the one in Sacramento. For more infomation view “Innovative Economic Plans.”