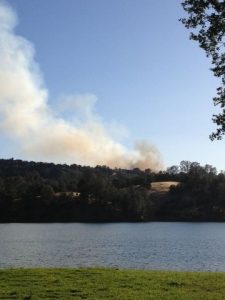 The blaze was located along the 4400 block of Little John Road. The fire was in the area of a few homes, but thankfully none were damaged. There were no injuries, and the cause of the fire remains under investigation. CAL Fire units responded from Columbia, San Andreas, Altaville, Murphys, Copperopolis, Arnold and Groveland. In addition, local resources responded from Copperopolis, Murphys and Altaville-Melones.

The fire was first reported at around 6:30pm. Click here to view a map of the area.

(A special thanks to Allison Jones for sending in photos)