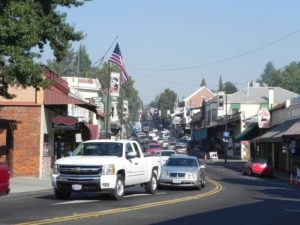 Sonora, CA — A 46-year-old Sonora man suffered major head trauma Saturday evening after falling off his bicycle into a traffic lane in the 400 block of South Washington Street.

According to the sheriff’s report, emergency personnel responding to the accident around 5:30 p.m. found Sean Boles unconscious on the roadway, bleeding from a head wound. Initially transferred to Sonora Regional Medical Center, he was later flown to Modesto Memorial Hospital for treatment.

The report also indicates further investigation determined that Boles had been drinking when he somehow rode his bike off a raised sidewalk and landed on his head in the street. He was not wearing a bicycle helmet at the time of the accident.