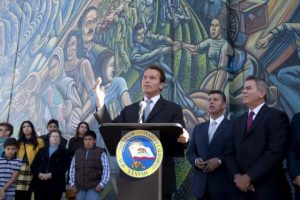 Sacramento, CA — Abel Maldonado was formally introduced today by Governor Arnold Schwarzenegger as his nominee for the Lt. Governor position.

Schwarzenegger says, “He has earned a reputation as a pragmatist, a reformer and a relentless advocate for his constituents. Senator Maldonado is also a model of post-partisanship.”

Maldonado broke from Republican ranks in February voting for a budget package that included tax increases. It was supported by Schwarzenegger and the Big Five lawmakers.

Maldonado’s appointment must still be confirmed by the Legislature. The Lt. Governor position was formerly held by John Garamendi, who has won a seat in the U.S. House of Representatives. Senator Dave Cogdill was believed to have been on Schwarzenegger’s short list of finalists.