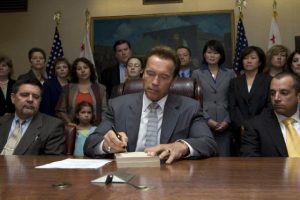 Sacramento, CA — Governor Arnold Schwarzenegger cut an additional $656 million from the new state budget before signing it Tuesday in Sacramento.

By use of the veto, Schwarzenegger made cuts to child welfare, heath care for the poor and Aids prevention.

Schwarzenegger also cut an additional $6 million from state parks. The California State Parks Foundation now estimates that over 100 parks will be forced to close. A list has still not been created.

The Governor referred to the budget package as, "The good, the bad and the ugly."

He says it forces California to live within its means, and includes cuts to schools, prisons and other government programs.