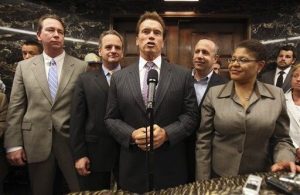 Sacramento, CA — A vote on whether to allow the early release of up to 27,000 California inmates has been postponed until next month.

Earlier it was included in the budget package put together by the Big Five lawmakers, but has been removed in hopes of gaining the needed votes to pass the budget compromise.

The release plan proposed by Governor Schwarzenegger would have saved around $1.2 billion. 6,300 elderly inmates would have been moved to a care facility and subject to electronic monitoring, and around 8,500 illegal immigrants would have been deported. Many inmates nearing the end of their sentence would also be released early.

A vote on the budget package is set for later today.