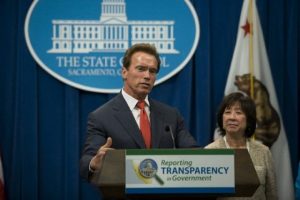 
“Hello, this is Governor Arnold Schwarzenegger with another California Report.

This was a groundbreaking week in California.

Millions of people went to the polls and let their voices be heard.

I want to talk about a few of the key issues Californians voted on.

First, I was very pleased that voters approved my nominee for the Supreme Court, Tani Cantil-Sakauye.


She is the first Filipina Chief Justice in the history of our state.

And I know she will be a fair and independent arbiter of the law for many, many years to come.

Then, I want to talk a little bit about the reforms.

As you know, I have been pushing to fix the broken systems here in California for many years.

As a matter of fact, it goes back to 2003 when I was first elected.

The politicians and the political parties spent millions of dollars on this to try and undo the historic redistricting reform we passed in 2008.

That reform takes the power to draw legislative district lines away from the politicians and the political parties and gives it to the people.

This will lead to more competitive races and fewer hyper-partisan legislators, thus reducing gridlock and increasing cooperation and compromise.

That is the only way we can get things done in Sacramento, when the politicians come out of their ideological corners and work together.

Not only did voters reject rolling back this reform but they also approved Proposition 20, which expands redistricting to Congressional Districts.

These are the kind of reforms we need nationwide.

They can go back and forth.

But if the parties are not willing to work together, we can never get anything done in Washington.

Now here is another one.

This was an effort bankrolled by greedy Texas oil companies to undo our environmental laws.

All the things we have done to improve our environment and to reduce greenhouse gases they wanted to undo it.

The oil companies flexed their muscles and spent tens of millions of dollars on this.

But let me tell you, we didn’t take it.

Oh yeah, we flexed right back.

The people joined us and said no to Proposition 23.

That was a great, great victory for the environment here in California.

Now why are our environmental laws so important?

First of all, to improve the public health and reduce the number of Californians who suffer from asthma, lung cancer and to cut down the 19,000 people who die every year from smog-related illnesses.

Also, to ensure our economy remains a powerful engine of green innovation and job growth.

Clean energy, in fact, is one of the few industries creating jobs right now.

And let’s not forget to strengthen our national security and help this nation once and for all free itself from the tyranny of foreign oil.

And to reduce greenhouse gases and fight climate change.

So I am very proud of the success we had on election day.

And of course, not only did California beat Texas at the polls this week, we also beat them in baseball.

So what a terrific week for California.

I just love it.