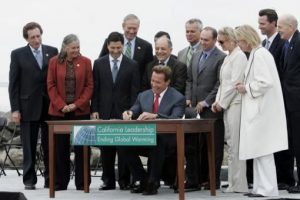 California Governor Arnold Schwarzenegger was Tuesday’s KVML “Newsmaker of the Day”. Here are his words:


I have just returned from a trade mission to Asia to pump up the California economy and to create jobs, jobs, jobs.

With this difficult economy, increasing trade is critical to California, where one in seven jobs is trade related.

That’s why I visited some of our state’s most important export markets, China, Japan and South Korea.

And let me tell you, I saw the power of international partnerships at work.

Listen to this, Hyundai announced that it has chosen to not only keep its North American headquarters here in California, but to expand and double its size.

It will create 1,500 construction jobs and invest $130 million in building its new headquarters.

Hyundai could have built anywhere, but it is choosing to make its largest U.S. investment ever, right here in our Golden State.

When we were in Korea, we also celebrated another big move for California.

These two buildings will remake the Los Angeles skyline and transform an entire city block.

-and $20 million annually in tax revenue for Los Angeles.

And we told the world that California will bid for the 2020 Expo.

We know that World Expos are big economic drivers.

They bring in millions of tourists from across the globe.

They create thousands of jobs.

And they lead to new public transportation, buildings and other infrastructure that Californians would enjoy for a long time to come.

In Japan, China and South Korea, we rode bullet trains and learned from countries that are setting the standard internationally.

California is moving ahead to become the first state in the U.S. with its own 200-mph-plus high-speed rail.

And there was great news, Japan, China and South Korea all want to compete to build our new railway.

And they all announced during our visit that they can provide the financing to make our plans a reality.

And there was so much more in Asia, from meeting the Chinese workers who are proudly building our Bay Bridge to seeing a California-born company at work in China.

These trans-pacific relationships are so important to a healthy California economy.

After all, we export more than $120 billion in goods annually. And jobs are tied to every dollar.

Our trade mission was a success.

But I will tell you, when the plane touched down in California, I was thrilled to be back.

No place in the world is more beautiful than the state we live in.

California has a spirit and lifestyle that you can’t find anywhere else.