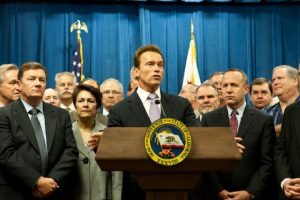 This week, I wrote an editorial for the Wall Street Journal about a problem that California has been sweeping under the rug for years.

It is unfunded retirement promises for government employees, and that is what I want to talk to you about today.

This is a major, major problem and a huge challenge for our state.

I know some critics have accused me of “bullying” state employees when I call for an end to runaway spending on retirement benefits.

This is a bunch of nonsense because I’m not bullying anybody.

What I am saying is, there is a problem and we should fix it.

I am very aware that our state employees are terrific.

Our state employees are hard working and valuable contributors to California.

Roughly 80 cents of every government dollar goes to employee compensation and benefits, and those costs have been rising fast.

In California, spending on state employees over the past decade has risen nearly three times faster than our revenue, crowding out spending on critical programs such as higher education, environmental protection, parks, public safety and more.

Worse, much bigger increases in employee costs are on the horizon.

The state is now saddled with $550 billion of retirement debt owed to government employees.

We are talking about ten times the amount of money we spend on education, kindergarten through 12th grade.

All of that debt was created without the citizens’ knowledge, much less their approval.

But the citizens and taxpayers have to foot the bill.

This year, the state is spending more than $6 billion on retirement benefits, exceeding what we’re spending on higher education.

This is what you call living in the past, when we spend more money on retirement benefits for state employees than on the education of our children in universities.

Next year, those costs will rise another 15 percent.

They are destined to grow so much faster than state revenues, which means they will eventually crowd out every single program in the state budget.

This means we will have less and less money for the programs that Californians depend on.

I’m talking about, as I said earlier, education, anti-crime programs, health programs and even what we do for our veterans. All of that will be crowded out by state employee retirement spending.

Now, for years I’ve asked the legislature to stop adding to pension and retirement debt,
but they have refused to do so.

Because it is not their money they are spending, it is yours.

You see, they have never signed the check on the front.

They are very good at doing that.

If this was their own money, all this would come to a grinding halt.

But it is your money.

And listen to this.

Now the Democratic leadership in the state legislature is even proposing to raise your taxes because they know they are running out of money.

That is the last thing we want to do, raise taxes to cover rising public-employee costs.

But what will they do next year when those costs grow 15 percent more?

Will they raise taxes again?

And the year after that when they’ve gone up again?

We must not raise taxes or borrow money.

What we have to do is fix the problem.

That is why I insist on pension reform.

I have vowed not to sign a budget until we have pension reform, once and for all.

Now, I am under no illusion about the difficulty of my task.

Government employee unions are the most powerful political forces in our state, and largely control Democratic legislators.

But for the future of our state, no task is more important.

And I’ve always said, way back when I ran in 2003, I said when the special interests push me around, I will push right back.

That is exactly what I am going to do right now.

I am not going to let them push me around.

There is something wrong when we have those huge increases in pensions over the last ten years from $150 million to $6.5 billion, that is unfair.

What is also unfair is that you have to pay for your own pensions, and the public employees think that you should also pay for theirs.

If you ask them to put in 5 percent more toward their pensions they are up in arms.

Well, let me tell you.

We will solve this problem.

Democrats and Republicans will eventually come together on this issue, and we will solve this problem, once and for all.

Anyway, thank you very much for watching, and thank you for listening.”