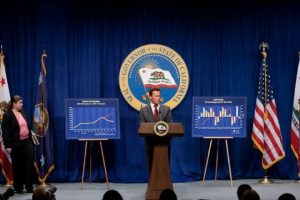 The Governor laid out his plans Friday afternoon for reducing the $19.1 billion deficit. It includes no tax increases and a reduction in planned spending by 20 percent.

The Governor is proposing that multiple social programs be cut, including the elimination of CAL Works.

Republican Assemblyman Tom Berryhill says, "We’re very pleased that there are no tax increases. That being said, these negotiations have just started and I think that we are going to have to be very tough and hold the line because the Democrats are absolutely going to be hammering to raise taxes on the hard working people."

Democratic Assembly Leader John Perez has released a statement, "The Assembly will not play politics with the budget, and we will specifically not engage in the politics of extraction. The Governor’s suggestions are clearly more reflective of a hyper-partisan political agenda than in finding real solutions to our problems. Putting Californians back to work is the fundamental priority for Californians, and we do not have the luxury of another bruising summer of ideological warfare."

Senate Republican Leader Dennis Hollingsworth has released the statement, "While this budget is painful, the Governor is right to recognize that we can’t afford any more tax increases. Republicans have been calling for meaningful budget reforms to responsibly reduce expenditures and bring the state’s finances into balance. Democrats have chosen to ignore reality, and this budget is a wake-up call that we need to get our fiscal house in order."