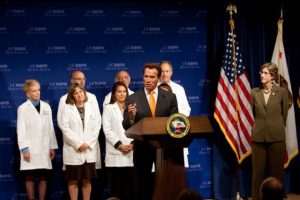 Sacramento, CA — After initially raising some concerns, Governor Schwarzenegger is changing course and says he is now pledging support to the President’s healthcare reform efforts.

The Governor says he has sent a letter to Health and Human Services Secretary Kathleen Sebelius announcing his intention to contract with the federal government and operate a temporary health insurance program for residents that are uninsured or have pre-existing conditions.

“The plan is not without flaws,” says Schwarzenegger. “But it is the law. And it is time for California to move ahead with it.”

Schwarzenegger says state agencies will begin enforcing many aspects of the federal legislation, including the removal of lifetime dollar limits on health insurance payouts, allowing children to stay on a parent’s policy until age 26 and banning retroactive policy cancellations.