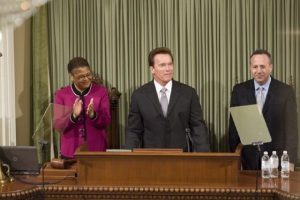 Republican Governor Schwarzenegger was Tuesday’s KVML "Newsmaker of the Day". Here are his words:

This week I was in Copenhagen, where leaders from around the world gathered in pursuit of a global pact to reduce greenhouse gas emissions and tackle climate change.

Now, international agreements are important. However, they are not the end-all be-all.

To win the fight against climate change, we need everyone to come together: businesses, environmentalists, entrepreneurs, ordinary citizens and subnational governments, such as states, cities, and provinces.

According to the UN itself, 80 percent of the necessary greenhouse gas reductions will happen at the subnational level.

So why should we focus all our faith and hope in international action?

History tells us that all great movements began at the grassroots level. Then they gain momentum and sweep throughout the nation.

There’s a lesson in this when it comes to climate change.

Even in the absence of national laws or international treaties, there is a powerful movement already underway to solve our environmental and energy problems.

In California we are implementing a law to cut greenhouse gas emissions 25 percent by the year 2020. We approved the world’s first Low Carbon Fuel Standard and tailpipe emissions standards. We are forming partnerships with states, provinces and cities in America, China, Mexico and Europe.

Right now businesses and entrepreneurs are investing billions of dollars into green technology.

But the fight against climate change is not just about government or businesses taking action. It’s also about unleashing the tremendous power of ordinary citizens just like you.

Did you know that air-drying clothes for six months saves 700 pounds of carbon dioxide?

And there are so many other ways to get involved, from buying cleaner cars and energy- efficient appliances to carpooling, conserving water and the list goes on.

And of course, going green is about more than protecting the environment.

We are showing that it is possible to protect both the economy and the environment.

So I say, let’s continue to all work together to push our nations and the world toward a clean, sustainable future.