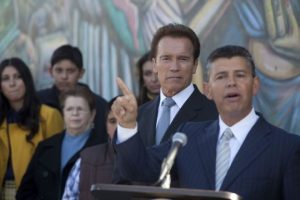 Abel Maldonado was approved in the Senate today, but then voted down 37-35 in the Assembly. Governor Schwarzenegger is arguing that Maldonado can only be rejected if it is by a majority of the Assembly members, which would be 41. The Office of the Assembly Speaker has issued a statement arguing against that claim.

The Lt. Governor’s seat has been vacant since November’s departure of John Garamendi to the U.S Congress.