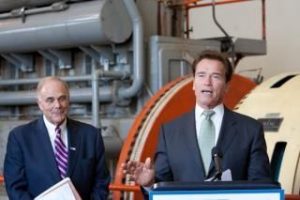 Sacramento, CA — Governor Schwarzenegger is calling on the federal government to increase its investment in infrastructure.

“The American Society of Civil Engineers has given our countries infrastructure a grade D,” says Schwarzenegger. “That’s a failing grade ladies and gentlemen.”

The Governor is calling on Congress to spend $440 billion each of the next five years for infrastructure improvements. Currently the country is spending $280 billion a year.

Schwarzenegger called for the increased allocation during a press conference with Pennsylvania Governor Ed Randell.