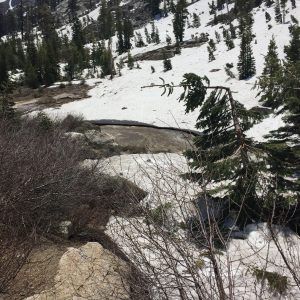 Persistent rain, heavy at times, is leading to rapid rises of rivers and streams and may lead to some flooding. Flooding of low lying areas is expected in the central valley, the foothills and the lower mountain elevations, were snow melt will add to the amount of water in the streams and on the roads.

In addition to the flood potential, mud and debris flows from the burn scars, rock slides, downed tree limbs and power outages are all possible.

First, the National Weather Service has issued a Wind Advisory for the Mother Lode and the Northern San Joaquin Valley, through noon on Wednesday.

Winds of fifteen to thirty mph will continue at times, with gusts up to fifty mph.

Some of the impacts will include downed tree branches, power outages and difficult driving conditions.

Second, a Winter Storm Warning has been issued for the Sierra Nevada above 4,500 feet, through 6 AM Thursday.

One to ten feet of total snow accumulation is expected above the 5,000 foot elevation. The higher you go, the more the snow.

Winds may gust as high as sixty mph.

Third, a Flash Flood Watch remains in effect for both the Sierra Nevada and the Mother Lode, through Thursday morning.

Three inches to one foot of rain is expected.

Finally, a Flood Watch is in effect for the Northern San Joaquin Valley through Thursday morning.

Two inches to half-a-foot of rain is expected in the Central Valley.

A Winter Storm Warning means there will be snow covered roads and limited visibilities. Travel is not recommended while the warning is in effect. If you must travel, keep an extra flashlight, food and water in your vehicle in case of an emergency.