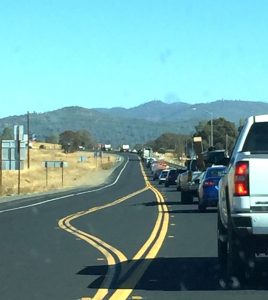 Clarke Broadcasting has heard of 15-minute plus waits on Highway 108/49 as motorists reported sitting in traffic between the Woods Creek Bridge in Jamestown (near the former Tweedy Tire building) and east of OByrnes Ferry Road. Too, during the 11 a.m. hour, travelers noted that shoulder work was being done near Chicken Ranch Road. Non-related intersection improvements in Jamestown at 5th Avenue (click here for details on that project) contributed to further slowing through Jamestown.

The four additional Caltrans work areas are as follows:

Another Highway 108 work zone active through Friday from 6 a.m. until 6 p.m. daily is the 14-mile section between the Sugar Pine Road end and restriction point, where drainage chores are also going on.

Look for Highway 120 delays near and within a 15-mile stretch between the Stanislaus/Tuolumne County line and Highway 49 junction, where today through Friday workers are attending to shoulder work under a moving closure from 7:30 a.m. to 3:30 p.m.

To review the rest of this week’s Caltrans work roster, click here.