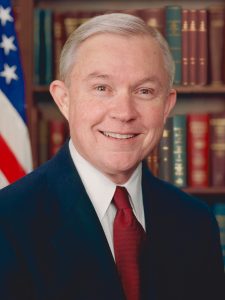 Sessions was Thursday’s KVML “Newsmaker of the Day”. Here are his words:

“As President Trump often says, “a country without borders is not a country.” I don’t know why that is so hard for some people to understand.

In the United States, we have the most generous immigration laws in the world. We take 1.1 million people on a path to citizenship every year. Another 700,000 come here to take jobs. Another half a million come here to take spots in our colleges and universities.

These are generous laws.

And yet, when we enforce them, we get attacked in the media by the so-called elites and their special interests.

I am convinced that the people of this country support these efforts. In the 2016 election, voters said loud and clear that they wanted a lawful system of immigration that serves the national interest. They said we’ve waited long enough.

I believe that this is one of the main reasons that President Trump won. He promised to tackle this crisis that had been ignored or made worse by so many before him. And now he’s doing exactly what the American people asked him to do.

Yet it seems like these same people who have been passing the buck on this crisis for decades haven’t learned anything. They’re still pushing the same old agenda.

They are fighting desperately to stop the good and decent wishes of the American people from being carried out.

From coast to coast—perhaps especially on this coast—there are politicians who think that having any border at all is mean-spirited, unkind, or even bigoted.

The vice-chairman of the Democratic National Committee recently wore a t-shirt that says “I don’t believe in borders.” I wonder what his neighbors think about that.

The name of the group that organized the Caravan to stampede our borders is “People Without Borders.”

The Attorney General of this state, Xavier Becerra says that “there’s really no difference between my parents and [illegal] immigrants except a piece of paper.” Paperwork, meaning compliance with our law, is important. And it’s a shame that I must say this to the top law enforcement official in California.

Last week a candidate for governor of New York said that we should “abolish ICE,” which she calls “a terrorist organization.” And she’s got 25 percent support in the latest primary polls.

A few months ago, I paid a visit to Sacramento. You may have heard about it. While I was there, the Mayor of Oakland called illegal aliens “law-abiding Oaklanders.” By definition, of course, that is not true.

In 2013, Hillary Clinton reportedly said in one secret speech, “My dream is a hemispheric common market, with open trade and open borders.” This is the presidential nominee of a major political party.

And these are just the explicit, overt examples. There are plenty of other examples of politicians who want to sound like moderates but whose votes and actions evidence a radical open borders agenda – not lawfulness. Apparently, even the libertarian CATO institute is in this camp.

The rhetoric we hear from the other side on this issue—as on so many others—has become radicalized. We hear views on television today that are on the lunatic fringe. And what is perhaps more galling is the hypocrisy. These same people live in gated communities and are featured at events where you have to have an ID even to hear them speak.

And if you try to scale their fence, believe me, they’ll be only too happy to have you arrested and separated from your family.

President Trump has been quite sensible. He made a generous offer to those who oppose this in Congress. He offered to give DACA recipients legal status if we can build a wall, close the maddening loopholes in our legal system, and switch from chain migration and the visa lottery to a merit-based system.

Their refusal of this offer should be baffling to any objective observer.

He simply asked that they agree to a serious solution to the problem. Why wouldn’t you want to end the illegality?

On Wednesday, President Trump ordered this administration to ensure that when we apprehend illegal aliens at the border and hold them for criminal prosecution and to adjudicate their immigration claims, we do what we can to keep families together.

How did the open borders crowd respond?

No. Now they don’t want them held or deported at all.

Does that surprise you?

We know which side of the debate is radical.

The so-called elites will always find an excuse to attack President Trump. They will not be satisfied as long as we are enforcing our borders.

As long as there is any immigration enforcement, they will oppose any effective limits.

But in spite of the critics, we are following the President’s executive order—and the President is listening to the American people.

On Thursday, the Department of Justice filed a request—right here in the Central District of California to modify the terms of the Flores consent decree, which is what keeps us from detaining alien children with their parents for more than 20 days while their asylum cases are pending. We are asking the court to let ICE detain illegal alien children together with their parent or legal guardian in family residential facilities.

This consent decree—and case law right here in California that has expanded it—has had disastrous consequences for illegal alien children.

In 2015, the Department of Justice under President Obama also tried to modify the consent decree for this exact reason. But it was blocked. And so the word got out that if you crossed our border illegally you would not be detained as long as you brought a child with you.

The results won’t surprise you. The number of people illegally crossing our border with children went up dramatically. In 2013, there were 15,000. This year we’re on pace for 88,000—a five-fold increase in five years.

And we know how well ‘catch and release’ worked. Last year there were 40,000 removal orders issued for people that didn’t show up for their hearings.

And it’s no wonder: our broken immigration laws are telling people that they can come here illegally. So why wait in line?

If we don’t fix our laws, then the flow of illegal immigration is not going to stop—and with it, the gangs, the drug cartels, and the human trafficking, including of children.

That’s why the President made clear that we are going to do everything in our power to avoid separating families—but we are still going to work to prosecute all of those who come here illegally.

By definition, we ought to have zero illegal immigration in this country. But we have more than 1 million illegal aliens just in the Los Angeles area. It is widely estimated that there are more illegal aliens in California than there are people in New Mexico.

There is no other area of American law with this level of illegality.

This is a big group of people. Too many of them have committed crimes here. By definition, every one of those crimes is preventable.

Thousands of illegal aliens are sitting in California jails that you pay for. 39,000 are in federal prisons. Another 16,000 are in custody of the U.S. Marshals.

Those are people who had to be tracked down and arrested by our law enforcement—every time, putting them in potentially dangerous situations.

In this city, Americans have been victimized countless times by people who shouldn’t even be here.

I could go on and on. These are the kind of people that sanctuary politicians want to keep in California. This is who they want to give sanctuary to.

The open borders politicians say they’re being compassionate. But where is their compassion for that rape victim? How do they explain to her that her attack happened because of their so-called compassion for her rapist.

Consider the rise of sanctuary policies.

It may sound nice, but these are de facto open borders policies. At their root, they are essentially a rejection of all immigration law.

Think about it. Under sanctuary policies, someone who illegally crosses the border on a Monday and arrives in Sacramento or San Francisco on Wednesday is home free—never to be removed.

That has real consequences.

ICE tells us that they are able to locate only about 6 percent of the criminals they ask sanctuary jurisdictions to turn over. The other 94 percent are walking free and often on their way to their next victim.

If they won’t allow us to deport someone who enters illegally and then commits another crime—who will they agree to deport? Sadly, we know the answer to this. Nobody.

I am confident that together we are going to win that case. It has been settled since 1819 that a state cannot actively attempt to undermine the execution of federal law or discriminate against the federal government.

We have also supported the state of Texas in its efforts to ban sanctuary cities. And since I became Attorney General, we have filed briefs to defend state or local law enforcement in about thirty cases. A number of courts have ruled in these cases that state or local cooperation with federal immigration enforcement efforts does not violate federal law.

The radical open border crowd should declare whose side they are on.

But we are resolute. We are going to keep fighting. With President Trump and with your strong support for police and for the rule of law, I am confident that we will turn the tide and keep the American people safe.”