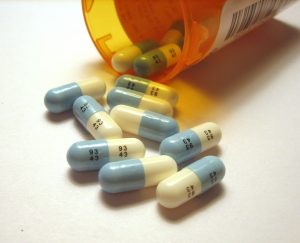 Stabenow was Tuesday’s KVML “Newsmaker of the Day”. Here are her words

“Today, President Trump is scheduled to speak about the need to fight rising prescription drug prices and that’s a good thing. But you and your family don’t need more words. You need more action.

Democrats believe that health care is a basic human right, and that includes the ability to afford your prescriptions. As we know, for many people, this is a matter of life and death.

Unfortunately, the pricing of prescription drugs is the ultimate example of a rigged system in my home state of Michigan as well as all across the country.

We have more pharmaceutical and health product lobbyists than for any other industry – 1,488 lobbyists last year! That’s almost 15 for every member of the United States Senate.

And their job is to stop competition and to keep prices high. And they made sure that Big Pharma was a huge winner in the Republican tax giveaway. Because of it, they have been able to put $50 billion, $50 billion, into the pockets of their CEOs and big investors through stock buybacks. But I don’t know even one person who’s seen the cost of their prescriptions go down.

It’s time to unrig the system. And Democrats are taking the lead on a number of important policies that will bring prices down.

I’d like to touch on three actions that could bring your costs down right away:

First is our legislation to allow Medicare to use its group purchasing power to negotiate the lowest drug prices.

Currently, Medicare isn’t allowed to negotiate the best price for you and your family. And frankly that’s ridiculous! It’s time to harness the bargaining power of 41 million American seniors to bring down prescription drug costs.

Second, we are committed to unrigging the system by ensuring that you and your family are paying the lowest possible price at the pharmacy.

And that’s because often pharmacists are banned by contracts from telling their customers that they could save money by paying out of pocket.

After Michigan Pharmacists brought this to my attention, I introduced legislation with other Senators to ban these ‘gag clauses.’ It’s just plain wrong! And a study released this year says that people are paying more than they need to …..23% of the time.

And finally, we’re pushing President Trump to immediately lower the cost of naloxone. This lifesaving drug that is used to reverse opioid overdoses has been around for more than 45 years and could be purchased for $1 in 2005.

I urge President Trump to listen to his own Commission on the Opioid Crisis, which recommended empowering the Secretary of Health and Human Services to negotiate the lowest possible price for naloxone and do it now.

Democrats promise to keep doing everything we can to bring down the cost of the medications you need. It’s time for our Republican colleagues to join us.”