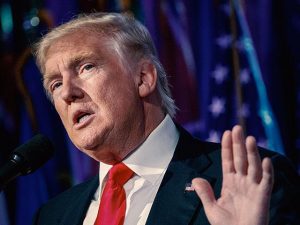 Trump was Wednesday’s KVML “Newsmaker of the Day”. Here are his unedited remarks:

“Well, thank you very much, Secretary Nielsen; Acting Commissioner McAleenan; and the incredible Border Patrol agents, CBP officers who are doing an amazing job; ICE agents and officers, who I know so many of you.

Every day, criminals and tariffs try to infiltrate our country. You got a good glimpse of it before. We did it together, with the media, frankly. I didn’t know we were going to be doing that, but you got, really, maybe a far better glimpse than you’re going to get right now.

But the border wall is truly our first line of defense, and it’s probably, if you think about it, our first and last, other than the great ICE agents and other people — moving people out. It will save thousands and thousands of lives, save taxpayers hundreds of billions of dollars by reducing crime, drug flow, welfare fraud, and burdens on schools and hospitals. The wall will save hundreds of billions of dollars — many, many times what it’s going to cost.

We must also close the deadly loopholes exploited by smugglers and traffickers. And we’re in that area. We’re in one of the many areas along the border where we have that problem. And we have to confront the dangerous sanctuary cities, which you’ve been all hearing so much about.

California sanctuary policies put the entire nation at risk. They’re the best friend of the criminal. That’s what exactly is happening. The criminals take refuge in these sanctuary cities, and it’s very dangerous for our police and enforcement folks.

The smugglers, the traffickers, the gang members, they’re all taking refuge, and I think a lot of people in California understand that. A lot of people from a lot of other places understand it, and they don’t want sanctuary cities.

And I have to say, law enforcement — ICE, Border Patrol — all of the people that have been so good to me for so long, they’re really doing a job. But our job — and I think we all understand the job would be a lot easier if we weren’t protecting criminals in the sanctuary cities. We had a great talk about it inside.

Cooperation with Mexico is another crucial element of border security. DHS coordinates closely with the Mexican law enforcement, and we must absolutely build on that cooperation. Both countries recognize the need to stem the cross-border flow of illegal weapons, drugs, people, and cash.

I have a great relationship with the President of Mexico, a wonderful guy — Enrique. Terrific guy. We’re working — we’re trying to work things out. We’ll see whether or not it happens. I don’t know that it’s going to happen. He’s a very good negotiator. He loves the people of Mexico, and he’s working very hard. We’ll see what happens.

But we have to, obviously, have a couple of disagreements before we get there. You’ll see over the next month whether or not it takes place in this administration, meaning his administration. They have an election coming up. I hear they have some very good people running, and they have some that maybe aren’t so good. In any event, we’ll handle it.

I want to again thank everyone for being here today, and I want to again call on Congress to deliver a budget that protects our homeland and properly funds all of our law enforcement needs. I want to thank the Secretary. I want to thank ICE and the Border Patrol agents for their incredible work and their incredible bravery. I want to thank all of law enforcement on the border. It’s a dangerous job. It’s a tough job. And if you didn’t have even these remnant walls — we call them remnant; they’ve been here for a long time — people don’t say that. But they’ve been here for a long time. If you didn’t have them, you would have crime in numbers that far surpass the numbers that you see today.

So this was really a day where we look at the different prototypes of the wall. You’ve seen them. The media has seen them. And some work very well; some don’t work so well. When we build, we want to build the right thing.

Interestingly, the ones that work the best aren’t necessarily the most expensive — something I like about that ring.

Secretary, you want to say something?

SECRETARY NIELSEN: Just quickly, just to thank the President so much for his continued leadership. As he says, CBP and ICE both put their lives on the line every day to protect our country. For that, I’m forever grateful, both as — to serve as Secretary, but also as an American. And we will build this wall.

So thank you for coming out today. We’re building up a toolkit based on what we’ve learned from the research and development on the prototypes. And we look forward to breaking ground very soon, and securing our country.

So thank you again to the President for his continued leadership.

THE PRESIDENT: Thank you very much, everybody. Thank you.

Q Will you veto a bill with no punishment for sanctuary cities?

THE PRESIDENT: We’re going to see. We’re going to look at it. We’re looking at it very, very strongly. Sanctuary cities are protecting a horrible group of people, in many cases — criminals. And what happened, as an example, in Oakland was a disgrace to our nation. And we just can’t let that happen.

Thank you very much.”