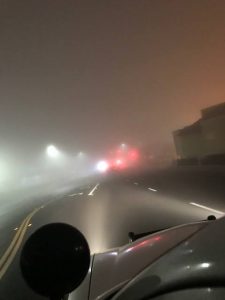 The National Weather Service has issued a Dense Fog Advisory for the Northern San Joaquin Valley, which is in effect until 11 AM PST this morning.

This means hazardous driving conditions through the morning commute hours due to poor visibility. Drive with caution as visibility can drop very rapidly at highway speeds. Slow down and watch for other drivers doing the same.

There will be a change to a wet weather pattern starting this week.

Several storms will move through the region this week and early next week.

The first storm will have high snow levels near the major trans-sierra pass levels (such as Highway 88) or higher, for most of the storm and the rainfall amounts will be relatively light.

Rainfall totals tonight and Tuesday will be under a half inch for the Northern San Joaquin Valley, with up to three quarters of an inch over the Sierra Nevada.

A stronger system with much lower snow levels is expected Wednesday night through Friday. This storm will see heavier rainfall ranging from half-an-inch to three quarters of an inch in the Central Valley and over two inches in higher elevations. Several inches of snow will be possible below the 7,000 foot level. Strong winds are not forecast with these first two systems but gusty southwest winds of up to thirty to forty mph will be possible on Friday at the highest elevations.

A third and possibly still stronger weather system, with much lower snow levels, is forecast to move through northern California early next week.

Motorists traveling into the mountains should be prepared for winter weather conditions and carry chains. Slick roads should be expected.

A Dense Fog Advisory means visibilities will frequently be reduced to less than one quarter mile. If driving, slow down, use your headlights, and leave plenty of distance ahead of you.